The Wilshire Grand, standing at 1,100 feet tall, has dramatically changed the LA skyline and is the tallest structure ever to be built in an earthquake zone. The building is one of the most advanced in the world when it comes to seismic engineering and was built using massive bracing devices known as Buckling Restrained Braces (BRB’s). Schuff Steel worked on the Wilshire project for 3 years and erected the largest BRB’s for seismic buildings, in the world. The building itself is an engineering marvel.

First seen and published on Wired.

THOUGH OFTEN FORGOTTEN amid the spectacle that is Hollywood, Sunset Boulevard, and Beverly Hills, downtown Los Angeles (#DTLA) is in the middle of a massive rebirth. A big—really big—part of that is the Wilshire Grand Center, a glittering, 73-story, 1,100-foot tall skyscraper nearing completion on the western edge of downtown. The skyline-altering building will be a high-tech marvel when it opens next year, with 16 fast, double-decker elevators, vast walls of dynamic LED lighting for that Blade Runner vibe, and a water reclamation system to irrigate its landscaping. With its spire, it will be the tallest building west of Chicago and the Mississippi River.

But the billion-dollar hotel, office, and retail tower, funded by Korean Air, will also be one of the most advanced in the world when it comes to seismic engineering—something all buildings in the region need to worry about. It uses massive bracing, oceanic volumes of concrete, and plenty of smart engineering to help it withstand temblors, even those greater than the devastating Northridge Earthquake of 1994. But along with seismic resistance, it’ll also have to handle wind forces that other buildings do not, due to its unusual shaping. “It’s a big building, and because it’s a hotel with all the rooms facing outside, it’s very slender,” says Chris Martin, CEO of design firm AC Martin Partners, which has helped shape the LA architectural landscape for a century. “So if you take a slender, supertall building in a seismic environment and factor in the wind, it’s going to be a very dynamic structure, with lots of movement from above and below.”

To ensure the tower could safely accommodate such forces—including bending and leaning with the wind—engineers used computer simulations to stress a digital model of the structure. The Wilshire will need to withstand earthquakes up to roughly magnitude 7.4, which could be generated by the San Andreas Fault 46 miles away—though a fault line just a quarter-mile away from the site, the Upper Elysian Park Thrust, could cause a magnitude 6.4 quake. The solution: a massive, rectangular central core with walls up to four feet thick, measuring 32 feet on one side and 128 on the other. The core stabilizes the building against both seismic and wind forces, and provides an anchor for structural elements attached to the outer walls. It reaches five levels underground and then 850 feet into the air. The foundation needed to be particularly robust to help stabilize the building in a quake, and it was the largest continuous concrete pour in history, with 2,100 truckloads of concrete dumping 82 million pounds in early 2014 to create the 17.5-foot-thick concrete foundation.

The core is supplemented with three rings of multi-story buckle-resistant braces, which lock into its thick walls. These shock-absorber-like structures are attached to the floors on levels 27, 53-59, and 70-72, and extending up diagonally three stories or more to the steel perimeter columns on the outer edge. “They bend dynamically and absorb energy that would ordinarily be destructive,” says Martin. In a major LA quake, conventional steel outriggers would generate huge forces, large enough to damage the columns and core walls where they attach, according to engineer Leonard Joseph, a principal at Thornton Tomasetti, one of the two engineering firms that collaborated on the building’s seismic resistance strategy. (The other was Brandow & Johnston, Inc.)

So engineers used braces that yield, stretching and squashing like taffy. Each one has a long steel bar, connected to the structure at each end. The bar gets a special slippery coating before being encased within a concrete-filled steel pipe, so it stays straight under pressure. But it can still stretch and “neck”—or become narrower—as iron molecules within the steel shift their positions. When deformed beyond its elastic limit, the metal gets hot, turning the kinetic energy of motion into thermal energy. “You can feel this effect when repeatedly bending and unbending a paper clip,” says Joseph. “The same thing occurs as the long inner steel bar of a buckle-resistant brace cycles through stretching and squashing.” That absorbs energy and dampens the structure’s movement.

Though these braces have been used before, clustering four huge braces in a group created the highest capacity system in the world, with a yield strength of 8.8 million pounds per outrigger. (That’s strong enough to suspend 110 fully loaded trucks.) Just as is required when installing shock absorbers in a car, the topmost braces had to be compressed for installation, which required loading them with 1 million pounds of force each. The dramatic structures—with their enormous bolts and streamlined shaping—will be left exposed as part of the interior design.

All of that engineering will support a building designed to be experienced from the top down. Elevators will zip guests to the 70th floor in just 50 seconds, where the InterContinental Downtown Los Angeles will keep its lobby—guests will actually take the elevator down to their rooms. Above the lobby is a 100-foot-tall sail-shaped penthouse built out of glass and steel, with dramatic exterior lighting at night. That feature—designed to emulate Half Dome in Yosemite National Park—makes the Wilshire the first skyscraper in the city without a flat roof: Since 1974 LA buildings have been required to accommodate helicopter pads for emergency evacuations. Since then, with only one rooftop rescue required, the firm successfully petitioned to remove the requirement—as long as they installed an additional, dedicated escape staircase.

The roof will also have an open-air plaza so guests can enjoy the views and the Los Angeles climate. “I want all Angelenos to look at this with pride and know this was built for them, and I want them to go to the 73rd-floor deck and enjoy the open air and the vistas all the way to Catalina Island,” Martin said. Hovering 178 feet above them will be the building’s recently-completed perforated white spire, illuminated by programmable colored lighting.

In the event of an earthquake, people on those upper floors will be in for ride. “Everyone will be shaken both physically and emotionally,” Joseph says. “The higher you are in a building—any building—the larger the shaking effect will be.” The calculated peak acceleration at the top of the tower is about 4 g’s, on par with a Space Shuttle launch. “But it’s back-and-forth motion, so no one is going into orbit.” At the top of the Wilshire, all of the energy from an angry fault will feel like swaying and jiggling.

A comprehensive look at what drives the cost of steel.Get the Report 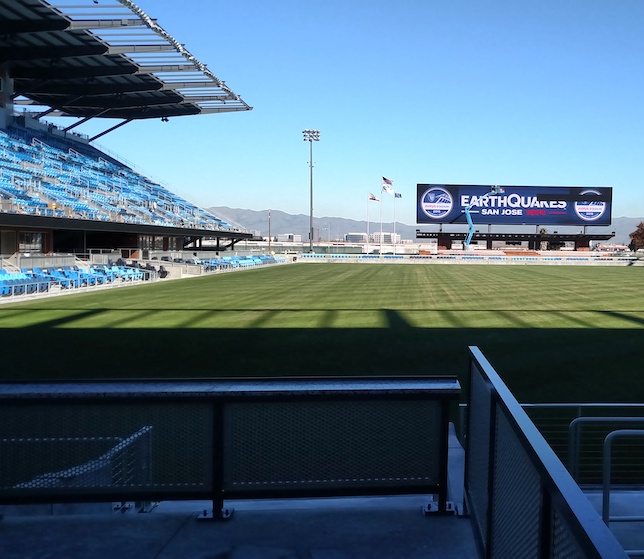 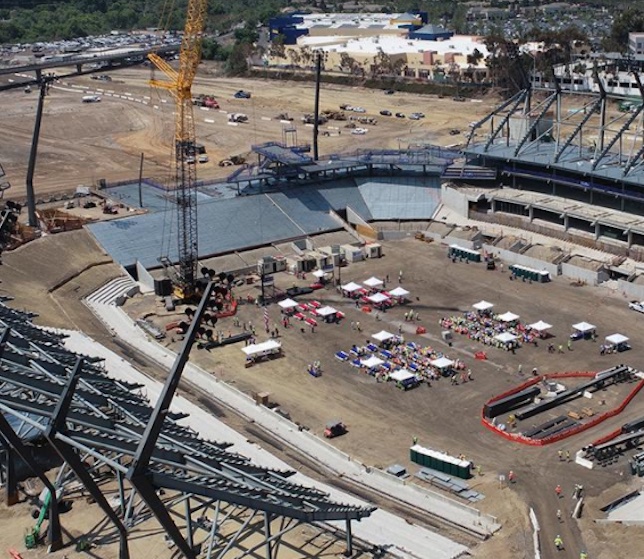 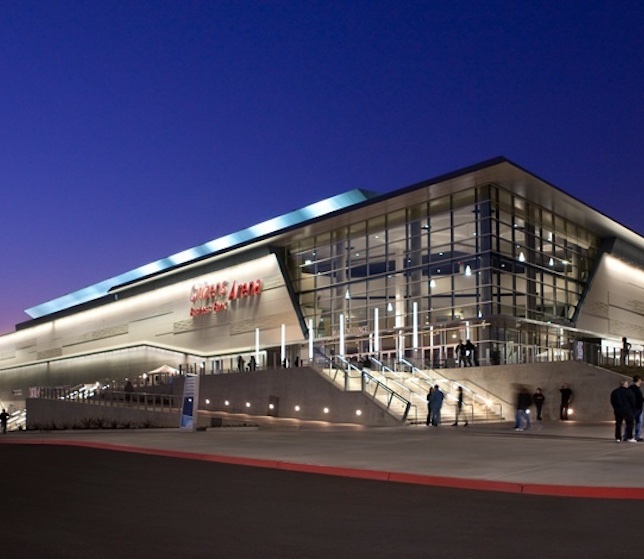 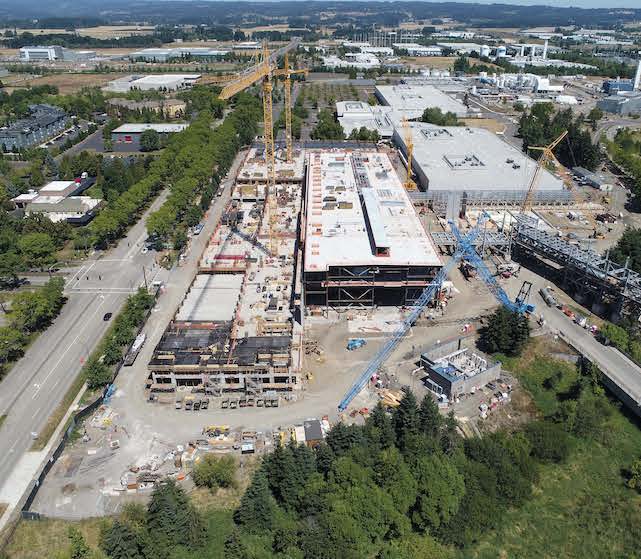 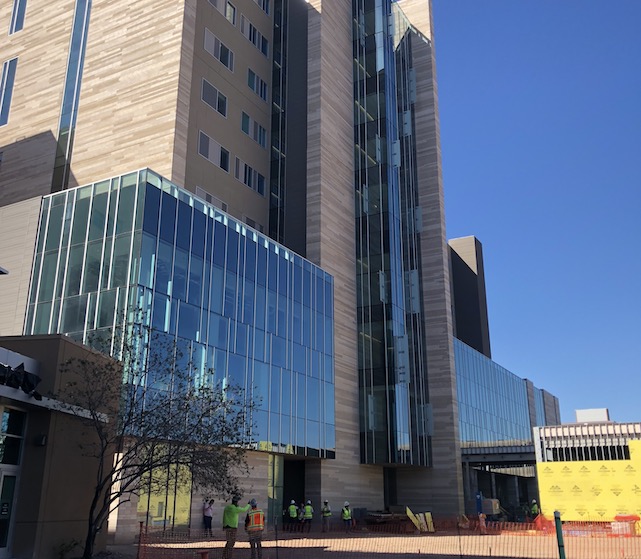 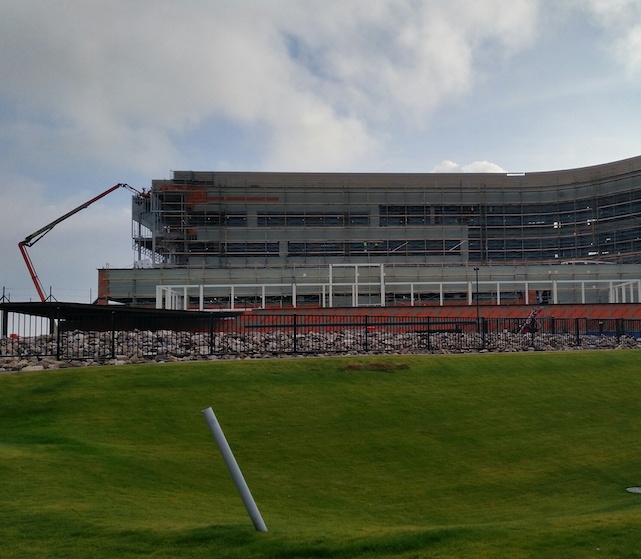